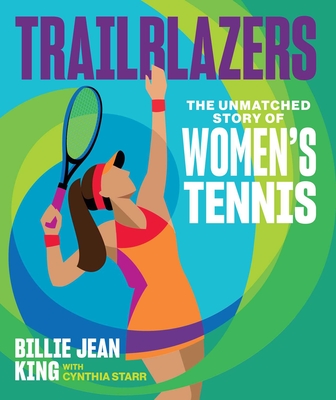 
THIS IS A PRE-ORDER - Click details below for publication date
Legendary tennis player Billie Jean King details the remarkable history of women’s tennis in this stunning edition of Trailblazers: The Unmatched Story of Women's Tennis.

In celebration of the Women’s Tennis Association’s 50th anniversary, this updated and expanded edition—based on the 1988 original We Have Come a Long Way: The Story of Women's Tennis—includes more than 250 photographs and 33 years’ worth of stories about inspiring women and their achievements. The book arrives 53 years after King and eight other women players broke with the male tennis establishment and launched their own professional tour.

With this gorgeous, photographically forward, and deeply moving ode to women’s tennis, King and coauathor Cynthia Star will continue the remarkable story in which King has played such an integral role, shedding new light on barriers that were overcome and milestones that were achieved. Women’s tennis today has never been more popular across the globe and, as this book demonstrates, has never been more diverse and inclusive.
Billie Jean King, a former No. 1 player in the world, won 39 Grand Slam titles during her playing career—12 in singles, 16 in women's doubles, and 11 in mixed doubles. She founded the Women's Tennis Association in 1973 and has been a champion for racial and gender equity ever throughout her life. She is the first woman athlete to receive the Presidential Medal of Freedom.

Cynthia Starr has written about sports, health, environmental issues, and the arts. She was the WTA’s Tennis Writer of the Year in 1984 for articles she wrote for USA Today. She majored in English at Carleton College and earned a master’s degree in journalism from Northwestern University.
A tennis legend, Billie Jean King has won 39 Grand Slam titles—12 in singles, 16 in women's doubles, and 11 in mixed doubles. She is a former world No. 1 tennis player who founded the Women's Tennis Association.