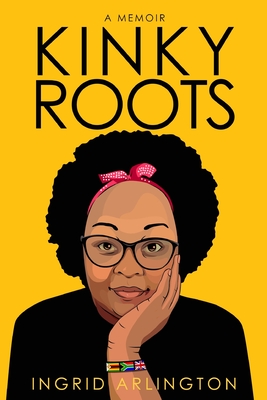 Kinky Roots: A Memoir is a 2021 Pencraft Book Award Winner for Non-Fiction. It is the memories, ruminations and vignettes of growing up in Southern Africa and moving to the UK.

Written from the life, wisdom and experiences of Ingrid Arlington, 'Kinky Roots' is an uplifting, poignant and reflective journey alongside the author. From a tumultuous upbringing in Zimbabwe, where violence and sexual assault was rife - to Ingrid meeting her husband in South Africa before starting an arduous new life in the UK. It's a story that explores how identity, excuses, religion, relationships, self-worth and family heritage all ultimately lay life's crazy pathway.

United Kingdom - When Ingrid Arlington looks back on her life, it's been a rollercoaster defined by adversity, poor relationships with men, a move to the other side of the world - and some bold life lessons that have ultimately made Arlington a fearlessly strong woman.

'Kinky Roots' invites readers to step alongside her as they rise from the ashes of loss and harassment in Zimbabwe, to a new life in the UK. No step has been without its challenges, yet Arlington steadfastly defines each as a vital part of her story.

That day, I felt lost, aimless, purposeless. I had received a rejection from an employment agent saying I didn't get the 33rd job that I'd applied for, whilst sitting on the couch watching NCIS reruns and stuffing my face with all sorts of snacks. I felt like a black Bridget Jones - except I wasn't trying to quit smoking and I already had the man. Now, you might ask how I got myself into this unemployed situation, feeling all sorry for myself. The easy answer is that I moved from South Africa to the UK with Alex (my husband of nine years), to pursue happiness and the European dream but without a plan of how to do this. The difficult answer, I guess, starts a year after arriving.

"I started re-evaluating my life when I hit unemployment rock bottom in the UK," explains the author. "It was a very raw process of questioning myself and my identity, and reliving my tough upbringing in Zimbabwe - a place where my mother chose her new husband over me, and where I'd been sexually harassed by the age of fourteen. I took a long, hard look at how I'd always chosen controlling men, and felt powerless in every relationship I'd gotten into. As I unraveled things, I began to figure out who I really am."

Continuing, "My biggest life change was meeting my husband in South Africa, only to find him relapsing on a drug habit - fiercely challenging my Christian upbringing. After our separation, I began to mull over everything from excuses, my beliefs, biases around religion, the LGBTQ community, my emotions and how music connects it all - and the definitions I devised are now all shared in this volume". It's going to leave people with plenty to think about.