The Hanmoji Handbook: Your Guide to the Chinese Language Through Emoji (Hardcover) 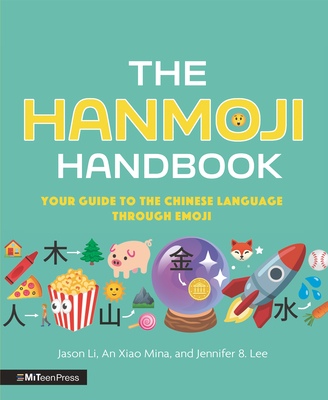 The Hanmoji Handbook: Your Guide to the Chinese Language Through Emoji (Hardcover)


Available to Ship from Warehouse - Ships in 3 - 6 days.
Learn Chinese with a new twist! This full-color illustrated handbook introduces and explains Han characters and idioms through the language of emoji.

Even though their dates of origin are millennia apart, the languages of Chinese and emoji share similarities that the average smartphone user might find surprising. These “hanmoji” parallels offer an exciting new way to learn Chinese—and a fascinating window into the evolution of Chinese Han characters. Packed with fun illustrations and engaging descriptions, The Hanmoji Handbook brings to life the ongoing dialogue between the visual elements of Chinese characters and the language of emoji. At once entertaining and educational, this unique volume holds sure appeal for readers who use emojis, anyone interested in learning Chinese, and those who love quirky, visual gift books.
Jennifer 8. Lee is a vice-chair of the Unicode emoji subcommittee and cofounder of Emojination, a grassroots group that advocates for more inclusive and representative emoji. She is also a former New York Times reporter, author of The Fortune Cookie Chronicles, and producer of the documentaries The Search for General Tso and The Emoji Story. Jennifer 8. Lee runs the Plympton literary studio and is from New York City.

An Xiao Mina is a creative strategist, writer, and artist whose work has been featured in the New York Times, the Economist, the Atlantic, and Fast Company. She's worked at the intersection of technology and culture for more than a decade at places like Meedan, Hyperallergic, and Harvard's Berkman Klein Center for Internet and Society. The author of Memes to Movements, she splits her time between New York and California.

Jason Li is an independent designer, artist, and educator. His practice revolves around promulgating bottom-up narratives, exploring networked technology, and helping people live safely on the internet. His works have appeared at the Victoria and Albert Museum, the Asian Art Museum of San Francisco, and on the BBC. He is an editor at Paradise Systems and a member of Zine Coop. He currently lives in Toronto.
Leveraging widely recognizable and pictographic emoticons, this innovative work appeals to humans’ language instinct and innate playfulness. . . Using crisp layouts, thoughtful descriptions and examples, and illustrated charts, this comprehensive primer entertains while explicating a high-context language family. . . Clever, complex, yet concise and fun: This guide promises to engage language learners and curious readers.
—Kirkus Reviews (starred review)