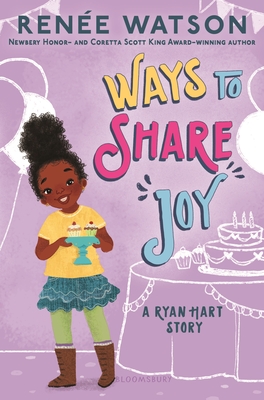 This is book number 3 in the A Ryan Hart Story series.

Ryan Hart is caught in the middle. She has an older brother and a new baby sister, and she's in a friendship tug-of-war with two friends who both want to be her best best friend. How can Ryan think about being kind to a classmate who is relentless with his teasing? Or be her signature sunny self when her brother, Ray, pulls the ultimate prank?

But even when it seems like nothing is going her way, Ryan still looks for a way to see the bright side of things, refusing to let anything steal her joy, and finding ways to share it with everyone she meets.

Renée Watson is a #1 New York Times bestselling author. Her novel, Piecing Me Together, received a Newbery Honor and Coretta Scott King Award. Her books include the Ryan Hart series, Some Places More Than Others, This Side of Home, What Momma Left Me, Betty Before X, cowritten with Ilyasah Shabazz, Watch Us Rise, cowritten with Ellen Hagan, and Love Is a Revolution, as well as acclaimed picture books: Summer Is Here, Maya's Song, The 1619 Project: Born on the Water, written with Nikole Hannah-Jones, A Place Where Hurricanes Happen, and Harlem's Little Blackbird, which was nominated for an NAACP Image Award. Renée splits her time between Portland, Oregon and New York City.
www.reneewatson.net
@reneewauthor

“A lovely cast of characters, delightfully relatable dilemmas and solutions, and a character with an authentic voice. A tale of family and friendship that exudes pure joy.” —Kirkus Reviews

“Move over Ramona Quimby, Portland has another neighbor you have to meet!” —Kirkus Reviews, starred review, on WAYS TO MAKE SUNSHINE

“Watson warmly weaves together slice-of-life moments that capture youthful doubt alongside moments of loss and joy, showing a tight-knit family navigating difficulties with plenty of courage and plenty of love.” —Publishers Weekly, starred review, on WAYS TO MAKE SUNSHINE

“A fresh beginning to a new chapter book series featuring a girl who can coax out sunshine from behind the darkest storm.” —Shelf Awareness, starred review, on WAYS TO MAKE SUNSHINE

“One can only imagine that Ramona Quimby would have a lot of fun cooking up adventures with this new girl in town.” —New York Times Book Review on WAYS TO MAKE SUNSHINE

“Middle graders who like realistic fiction will enjoy getting to know this earnest girl and her supportive family.” —School Library Connection on WAYS TO MAKE SUNSHINE

“The theme of loving family and friends even through difficult times will resonate with readers.” —School Library Journal on WAYS TO MAKE SUNSHINE