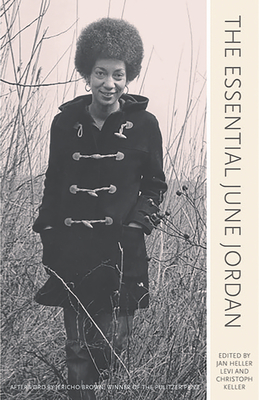 
Available to Ship from Warehouse - usually ships in 6 - 10 days.
Honored as a Best Book of 2021 by Publishers Weekly This volume of verse displays the undeniable legacy June Jordan left on both our literature and culture. Collected here are blazing examples of poetry as activism, stanzas that speak truth to power and speak out against violence against women and police brutality. But Jordan also speaks on the significance of hope, mixing, as Brown puts it, 'the doom and devastation made mundane through media with the hard decision to love anyway.'--O, The Oprah Magazine A selection of poems published between 1971 and 2001, this posthumous volume reflects Jordan's view of poetry as 'a political action' that can 'build a revolution.' Her own work is filled with love and delight as well as revenge and justice.--New York Times Book Review, Editor's Choice The Essential June Jordan honors the enduring legacy of a poet fiercely dedicated to building a better world. In this definitive volume, introduced by Pulitzer Prize winner Jericho Brown, June Jordan's generous body of poetry is distilled and curated to represent the very best of her works. Written over the span of several decades--from Some Changes in 1971 to Last Poems in 2001---Jordan's poems are at once of their era and tragically current, with subject matter including racist police brutality, violence against women, and the opportunity for global solidarity amongst people who are marginalized or outside of the norm. In these poems of great immediacy and radical kindness, humor and embodied candor, readers will (re)discover a voice that has inspired generations of contemporary poets to write their truths. June Jordan is a powerful voice of the time-honored movement for justice, a poet for the ages. Introduced by Jericho Brown, winner of the 2020 Pulitzer prize in poetry.
June Jordan was born in Harlem in 1936 and was the author of ten books of poetry, seven collections of essays, two plays, a libretto, a novel, a memoir, five children's books, and June Jordan's Poetry for the People: A Revolutionary Blueprint. As a professor at UC Berkeley, Jordan established Poetry for the People, a program to train student teachers to teach the power of poetry from a multicultural worldview. She was a regular columnist for The Progressive and her articles appeared in The Village Voice, The New York Times, Ms., Essence, and The Nation. After her death from breast cancer in 2002, a school in the San Francisco School District was renamed in her honor.