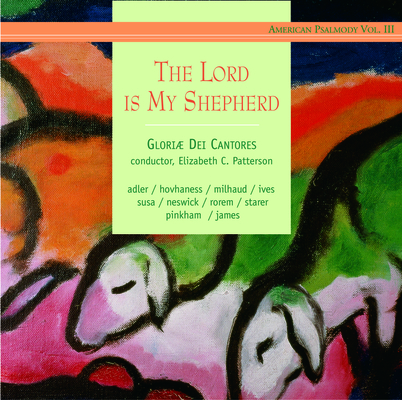 By Gloriae Dei Cantores (By (artist))

The Lord is My Shepherd is the third volume in the American Psalmody series, a distinguished series devoted to musical interpretations of the psalms by American composers. Of a previous recording in this series, Fanfare magazine raved, "This interesting collection of sacred music, American style, can hardly miss: God Himself seems to have placed His seal of approval on it."
Gloriae Dei Cantores (Singers to the Glory of God) holds a passionate dedication to the faithful representation of spiritual and musical authenticity in the choral arts. Sharing its vision of inspiration and hope, the choir has touched the hearts of audiences in twenty-four countries in Europe and Asia, as well as extensive tours and concert series in the United States. The choir's catalog of more than fifty recordings showcases an expansive repertoire, encompassing both masterworks and rarely performed musical treasures from Gregorian chant to the twenty-first century. Richard K. Pugsley and Gloriae Dei Cantores have garnered high praise for bringing lesser- known, yet fully deserving composers and their works to light. The choir makes its home at the Church of the Transfiguration in Orleans, Massachusetts, where it sings worship services throughout the year.
"The choir has a full, vibrant sound and sings with great fervor. . . Ned Rorem's Two Psalms and a Proverb is absolutely gorgeous. . . Bruce Neswick's stirring anthem I Will Set His Dominion in the Sea is also first-rate."
—Gramophone

"Fervent singing of a well-varied program.This is the third disc in a series entitled American Psalmody. The choir has a full, vibrant sound and sings with great fervor....Ned Rorem's Two Psalms and a Proverb is absolutely gorgeous, and this is its only available recording. The oldest work on the program is Ives' Psalm 100 and Gloriae Dei Cantores finds a devotional quality in the music...Bruce Neswick's stirring anthem I will set His Dominion in the Sea is also first-rate, good enough to make one eager to hear more of his work. A very worthwhile release. And do check out the two previous volumes particularly the second, which includes Charles Martin Loeffler's exquisite setting of By the Rivers of Babylon (again the only available recording)."
— Gramophone

"This is the third in a series of programs of biblical psalm settings by American Composers from Elizabeth C. Patterson's wonderful choir, Gloriae Dei Cantores. This only adds to my amazement at the incredible richness, variety, and sheer quantity of American choral music. I find myself reporting exciting discoveries in almost every issue of ARG. This program also exemplifies the primacy of biblical psalms as the favorite sacred texts of composers everywhere, past and present. Included here are works from Charles Ives, Ned Rorem, Alan Hovhaness, Daniel Pinkham, Robert Starer, and Samuel Adler. New to me are Philip James, Conrad Susa, and Bruce Neswick. Also heard is a wonderful cantata from Darius Milhaud which may strike you as an odd item here until you remember that he lived and worked in America for nearly 30 years.
I enjoy everything immensely, but high points for me were Ive's quirky and fascinating Psalm 100 and Robert Starer's high-impact Proverbs for a Son. I always marvel at Ned Rorem's sure knack for the human voice, and the three pieces from him here are among his best. And, I'm a hopeless sucker for the exotic and seductively spiritual music of Hovhaness Ð his first gentle, then insistent polyphony in the brief motet Make Haste makes for intensely metaphysical music as well. And the rest of it is so good that I hate to leave anybody unheralded.  This may be America's finest, most professional-sounding amateur chamber chorus. I've never heard a recording from them I didn't like. Based in Cape Cod, this group includes adult singers of all ages, occupations, and musical backgrounds...They perform only sacred music, but-after 30 recordings, have covered nearly its entire scope and range.
Their singing is startlingly superb. They achieve amazing rhythmic and tonal precision as well as wonderfully warm, yet clear sonorities."—American Record Guide