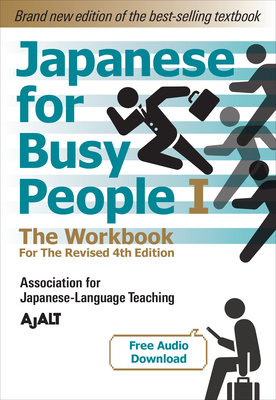 4th Revised Edition of JAPANESE FOR BUSY PEOPLE, the most popular Japanese language textbook series in the world.

Since it was first published in 1984, the focus of the Japanese for Busy People series has always been to teach Japanese for effective communication.

The workbook provides ample speaking and listening practice in the form of illustrated exercises that call on learners to construct dialogues and role-play in Japanese. Illustrations combined with conversations, which proceed at a natural pace in the audio recordings, help learners to feel as if they are actually experiencing each situation.

Through repeated oral and listening practice, learners will come to acquire the rhythm of real-life Japanese conversation.

Audio recordings can be downloaded for free from kodansha.us.
The Association for Japanese-Language Teaching (AJALT) was recognized as a nonprofit organization by the Japanese Ministry of Education in 1977. It was established to meet the practical needs of people who are not necessarily specialists on Japan but who wish to communicate effectively in Japanese. In 1992, AJALT was awarded the Japan Foundation Special Prize; and in 2010, it became a public interest incorporated association. AJALT created the best-selling Japanese for Busy People series, as well as the Japanese for Young People series, both published by Kodansha USA Publishing. AJALT’ s website is www.ajalt.org.