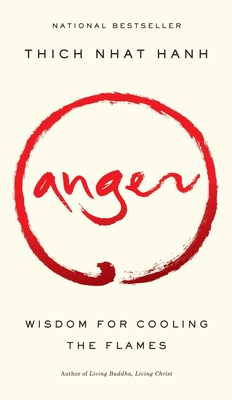 
Available to Ship from Warehouse - usually ships in 6 - 10 days.
"[Thich Nhat Hanh] shows us the connection between personal, inner peace and peace on earth." –His Holiness The Dalai Lama

Nominated by Martin Luther King, Jr. for a Nobel Peace Prize, Thich Nhat Hanh is one of today’s leading sources of wisdom, peace, compassion and comfort.

It was under the bodhi tree in India twenty-five centuries ago that Buddha achieved the insight that three states of mind were the source of all our unhappiness: wrong knowing, obsessive desire, and anger. All are difficult, but in one instant of anger—one of the most powerful emotions—lives can be ruined, and health and spiritual development can be destroyed.

With exquisite simplicity, Buddhist monk and Vietnam refugee Thich Nhat Hanh gives tools and advice for transforming relationships, focusing energy, and rejuvenating those parts of ourselves that have been laid waste by anger. His extraordinary wisdom can transform your life and the lives of the people you love, and in the words of Thich Nhat Hanh, can give each reader the power "to change everything."
Thich Nhat Hanh is a Vietnamese monk, a rare combination of mystic, scholar, and activist and one of the most beloved Buddhist teachers in the West. Poet, Zen master, and chairman of the Vietnamese Buddhist Peace Delegation during the Vietnam War, he was nominated by Dr. Martin Luther King, Jr., for the Nobel Peace Prize.
"Thich Nhat Hanh is a holy man, for he is humble and devout. He is a scholar of immense intellectual capacity. His ideas for peace if applied, would build a monument of ecumenism, to world brotherhood, to humanity." —Martin Luther King, Jr.

"He shows us the connection between personal, inner peace, and peace on earth." —His Holiness The Dalai Lama

"Hanh doesn't limit his task to discussing anger between families and friends; he also deals with anger between citizens and governments. That expansive vision is not surprising (Hanh, after all, is a Nobel Peace Prize nominee) but it is refreshing, lifting this book out of the self-absorbed, self-help pile." —Publishers Weekly

"Reminding us that small spiritual matters are really large spiritual matters, the author offers wisdom and serenity to comfort readers as they work through anger to a place of 'being peace.'" —Library Journal