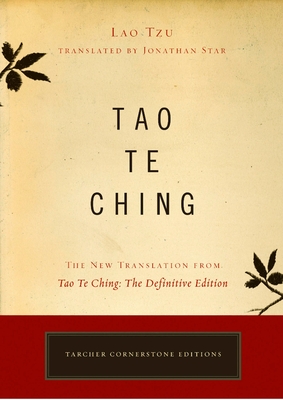 
Out of Stock in store and warehouse. We don’t have a restock date.
In the hands of Jonathan Star, the eighty-one verses of the Tao Te Ching resound with the elegant, simple images and all-penetrating ideas that have made this ancient work a cornerstone of the world's wisdom literature.

Gia-fu Feng was born in Shanghai in 1919, was educated in China, and came to the United States in 1947 to study comparative religion.  He held a BA from Peking University and an MA from the University of Pennsylvania.  He taught at Esalen Institute in Big Sur, California, and directed Stillpoint Foundation, a Taoist community in Colorado.  Gia-fu Feng died in 1985.

Jane English, whose photographs from the integral part of the book, holds a BA from Mount Holyoke College and received her doctorate from the University of Wisconsin in experimental high energy particle physics.  In 1985 she found her own publishing business, Earth Heart.  Her books and calendars include Different Doorway: Adventures of Caesarean Born, Mount Shasta: Where Heaven and Earth Meet (with Jenny Cole) and the yearly Tao Te Ching Calendar.  She was born in Boston, Massachusetts in 1942.

Chuang Tsu/ Inner Chapter (1974), a companion volume to Lao Tsu/ Tao Te Ching, is a direct outcome of the successful collaboration between Gia-fu Feng and Jane English on the Tao Te Ching.


"It would be hard to find a fresh approach to a text that ranks only behind the Bible as the most widely translated book in the world, but Star achieves that goal. . . . As fascinating to the casual scholar as it is for the serious student." -NAPRA ReView "Jonathan Star's Tao Te Ching achieves the essential: It clarifies the meaning of the text without in the slightest reducing its mystery." -Jacob Needleman