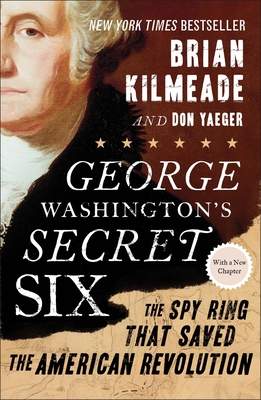 
Available to Ship from Warehouse - usually ships in 6 - 10 days.
*Now with a new afterword containing never-before-seen research on the identity of the spy ring’s most secret member, Agent 355

“This is my kind of history book. Get ready. Here’s the action.” —BRAD MELTZER, bestselling author of The Fifth Assassin and host of Decoded

When George Washington beat a hasty retreat from New York City in August 1776, many thought the American Revolution might soon be over. Instead, Washington rallied—thanks in large part to a little-known, top-secret group called the Culper Spy Ring. He realized that he couldn’t defeat the British with military might, so he recruited a sophisticated and deeply secretive intelligence network to infiltrate New York.

Don Yaeger has written or co-written twenty-three books, and lives in Tallahassee, Florida.

“A powerful new book . . . that reads like a modern-day spy thriller.”
—The Blaze

“A tale of patriotism and daring.”
—The Washington Times

“Anyone who believes that foreign espionage is pointless should read this book. More importantly, anyone who thinks the founding generation is irrelevant to modern America must read this book.”
—The Daily Caller

“Freedom is not free, never has been, and never will be. Kilmeade and Yaeger have done a wonderful job in reminding us all of the cost. Great read.”
—General Tommy Franks (U.S. Army, retired)

“A historical gem. I loved it.”
—Donald Trump

“We would not have won the Revolution and secured our freedom were it not for the leadership of George Washington and the courage of the spies he set in motion. George Washington’s Secret Six is a gripping and informative read.”
—Congressman Pete King, chairman of the Counterterrorism and Intelligence Subcommittee, House of Representatives Committee on Homeland Security

“Thrilling and accessible…. one of the more significant, compelling, and fascinating pieces of the country’s history.”
—Breitbart.com