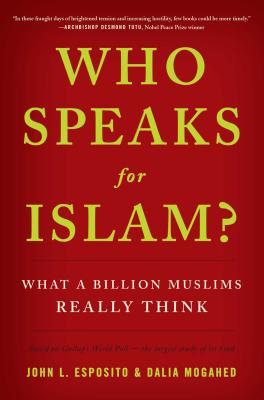 Based on the largest study of its kind, this book is the first to present the fascinating findings of the Gallup Poll of the Muslim World.

Are we on the verge of an all-out war between the West and 1.3 billion Muslims? When the media searches for an answer to that question, they usually overlook the actual views of the world’s Muslims.

Who Speaks for Islam? is about this silenced majority. This book is the product of the Gallup World Poll’s massive, multiyear research study. As part of this groundbreaking project, Gallup conducted tens of thousands of interviews with residents of more than 35 nations that are predominantly Muslim or have significant Muslim populations.

Gallup posed questions that are on the minds of millions: Is Islam to blame for terrorism? Why is there so much anti-Americanism in the Muslim world? Who are the extremists? Where are the moderates? What do Muslim women really want?

Grounded in Gallup World Poll data, not in contentious rhetoric, Who Speaks for Islam? brings data-driven evidence — the voices of a billion Muslims, not those of individual “experts” or “extremists”— to one of the most heated and consequential debates of our time.

John L. Esposito, Ph.D., is a leading expert on the Muslim world. He is a university professor and a professor of religion and international affairs and of Islamic studies at Georgetown University and the founding director of Georgetown’s Prince Alwaleed Bin Talal Center for Muslim-Christian Understanding in the Walsh School of Foreign Service. He is also the past president of the Middle East Studies Association of North America and of the American Council for the Study of Islamic Societies and a consultant to governments and multinational corporations. He is editor in chief of the Oxford Encyclopedia of the Islamic World and Oxford Islamic Studies Online. His more than 35 books include What Everyone Needs to Know About Islam and Unholy War: Terror in the Name of Islam. He currently resides in Washington, D.C. with his wife, Jeanette P. Esposito, Ph.D.

Dalia Mogahed is a Senior Analyst and Executive Director of the Gallup Center for Muslim Studies. She leads the analysis of Gallup’s unprecedented survey of more than one billion Muslims worldwide. Mogahed also directs the Muslim-West Facts Initiative (www.muslimwestfacts.com), through which Gallup, in collaboration with The Coexist Foundation, is disseminating the findings of the Gallup World Poll to key opinion leaders in the Muslim World and the West. She travels the globe engaging audiences on what Muslims around the world really think. Her analysis has appeared in a number of leading publications, including the Economist, the Financial Times, the Wall Street Journal, Foreign Policy Magazine, Harvard International Review, the Journal of Middle East Policy, and many other academic and popular journals. She lives in Washington, D.C. with her husband Mohamed and two sons, Tariq and Jibreel.

This feature require that you enable JavaScript in your browser.
END_OF_DOCUMENT_TOKEN_TO_BE_REPLACED

This feature require that you enable JavaScript in your browser.
END_OF_DOCUMENT_TOKEN_TO_BE_REPLACED

This feature require that you enable JavaScript in your browser.
END_OF_DOCUMENT_TOKEN_TO_BE_REPLACED