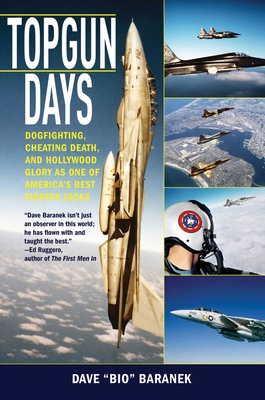 
This item may not be for sale. Contact store for more information.
Dave Baranek (callsign "Bio") was one of 451 young men to receive his Wings of Gold in 1980 as a naval flight officer. Four years later, seasoned by intense training and deployments in the tense confrontations of the cold war, he became the only one of that initial group to rise to become an instructor at the navy's elite Fighter Weapons School. As a Topgun instructor, Bio was responsible for teaching the best fighter pilots of the Navy and Marine Corps how to be even better. He schooled them in the classroom and then went head-to-head with them in the skies.

Then, in August 1985, Bio was assigned to combine his day-to-day flight duties with participation in a Pentagon-blessed project to film action footage for a major Hollywood movie focusing on the lives, loves, heartbreaks, and triumphs of young fighter pilots: Top Gun.

Bio soon found himself riding in limousines to attend gala premieres, and being singled out by giggling teenagers and awed schoolboys who recognized the name "Topgun" on his T-shirts. The book ends with his reflections on his career as a skilled naval aviator and his enduring love of flight.

The paperback and Kindle editions include more than fifty rare full color photographs of fighter jets in action.
Dave “Bio” Baranek is the author of Topgun Days and Before Topgun Days. He enjoyed a successful and satisfying twenty-year career in the United States Navy, starting with assignments to F-14 Tomcat squadrons and the elite Topgun training program, and on to the Joint Chiefs of Staff and the US 7th Fleet. Baranek retired from the Navy in 1999 and is now a defense contractor. He is married and lives in Satellite Beach, Florida. Learn more about Dave Baranek at www.TopgunBio.com.
"Top Gun Days" introduces readers to author Dave "Bio" Baranek's world as a veteran fighter pilot and instructor at one of the most famous combat training facilities in the world. Fans of the "Top Gun" movie will enjoy how Baranek worked with the video teams behind the scenes to make the classic memorable film. Baranek also conveys the feel of actually flying the incredible air craft as a portion of our air defense system. "Top Gun Days" is a revealing look at a world few of us get to