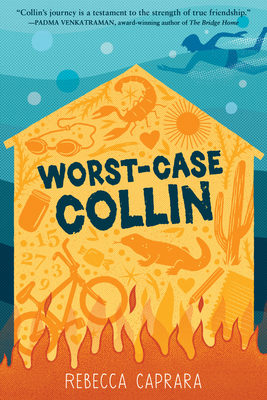 
Available to Ship from Warehouse - Ships in 3 - 6 days.
This poignant middle grade novel in verse follows twelve-year-old Collin who manages his anxiety by mapping out survival plans for any disaster or worst-case scenario.

Collin is always prepared for something to go wrong. Ever since he lost his mom in a car accident, he's been journaling about how to overcome things like avalanches, riptides, or even a bad case of halitosis. Meanwhile, Collin's father grows more distant by the day, and has started hoarding things throughout their house. Determined to hide his home life from his friends, Collin navigates middle school alongside the hilarious and clueless Liam, and Georgia, who Collin may have feelings for. Can Collin learn to be vulnerable around those he loves, even when he can't control every possible scenario?
Rebecca Caprara has been writing stories since she was a little girl. What she enjoys the most is writing across genres and form for middle-grade readers. The Magic of Melwick Orchard was her debut novel.
♦ Written in verse, Caprara’s latest centers heartbreaking main character Collin, plus trusty and loving sidekicks Liam and Georgia. Collin has more challenges than most middle schoolers. After the tragic death of his mother in a car accident, Collin is terrified of things going wrong, and his father begins to collect more and more junk that fills up the house. Collin must come up with all kinds of excuses not to have his friends over because of the state of his home. Readers learn about The Hoard—what Collin calls these piles of junk that make for extremely unsafe living conditions. As part of his anxiety about bad things happening, Collin creates a self-guide to emergency situations. These how-to guides are sprinkled throughout the book, which some children might find very helpful. When a prank involving a bully turns into an emergency situation, Collin’s preparedness makes him the hero. He has to rescue his father from a house fire that rages out of control because of The Hoard. Collin’s unique situation is realistically depicted alongside common middle school moments including pranks, bullying, endearing friendships, and self-examination.
VERDICT This lyrical title captures the vulnerability of a tween dealing with many challenges, both at school and home. A work of realistic fiction that has much to offer young readers experiencing anxiety and navigating similar middle school situations.
—School Library Journal, starred review

A young boy wrestles with his mother’s untimely death and his father’s consequent hoarding. Sixth grader Collin Brey is anxious. Ever since his mom died in a car accident two years earlier, he has carried an orange notebook full of worst-case scenarios running the gamut from a jammed door to a zombie attack. His father is a brilliant but disorganized math professor who is obsessed with proving the Riemann hypothesis. Collin battles bullies Tyson and Keith at school but is buffered by his two BFFs, Liam and Georgia. At home, Collin’s anxiety mounts, as his dad begins to acquire more and more stuff, first starting with thrift-store finds and then working his way up to things like bags of trash and toenail clippings. Ashamed, Collin tries to hide his increasingly distressing home life from his friends, all while battling unresolved grief and his tormentors. While Collin’s problems are heavy, Caprara gives him an accessible voice, even managing to imbue humor into the story alongside the many serious moments. Many of the poems are lyrical, flowing free verse, while others play with form. Interspersed beside the poems are Collin’s lists from his notebook. Together these elements provide an intimate look into his life and struggles. A note on hoarding and mental health is included. Most characters are presumed White.
Poignant, timely, and altogether affecting.
—Kirkus Reviews

In the two years since his mom’s sudden death, Arizona middle-schooler Collin has tried to deal with his grief by compiling a notebook of calamities—from #212, Indigestion, to #741, Typhoon—and ways to face them. He has no strategy for coping with the relentless bullying from classmate Tyson, though, or the way his distracted father has become such a manic hoarder that the house has turned into a filthy mess. Caprara chronicles Collin’s internal struggles, as well as his efforts to hide what’s happening from his friends and others, entirely in short-lined free verse interspersed with bulleted entries from his notebook. Readers will likely be appalled by his vivid, wrenching descriptions, but there are moments of poignancy (“she was / supposed to be / with us / forever”) and even humor to lighten the load, as well as a reassuringly large circle of supportive peers and grown-ups. Adult characters in fiction who fall prey to compulsive hoarding disorder often tend to be mothers, so this lyrical story offers an unusual perspective on living with a troubled parent.
—Booklist