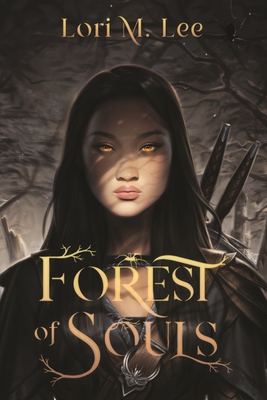 This is book number 1 in the Shamanborn Series series.

Danger lurks within the roots of Forest of Souls, an epic, unrelenting tale of destiny and sisterhood, perfect for fans of Naomi Novik, Susan Dennard, and Netflix's The Witcher!

Sirscha Ashwyn comes from nothing, but she’s intent on becoming something. After years of training to become the queen’s next royal spy, her plans are derailed when shamans attack and kill her best friend Saengo.

And then Sirscha, somehow, restores Saengo to life.

Unveiled as the first soulguide in living memory, Sirscha is summoned to the domain of the Spider King. For centuries, he has used his influence over the Dead Wood—an ancient forest possessed by souls—to enforce peace between the kingdoms. Now, with the trees growing wild and untamed, only a soulguide can restrain them. As war looms, Sirscha must master her newly awakened abilities before the trees shatter the brittle peace, or worse, claim Saengo, the friend she would die for.

Lori M. Lee is the author of Gates of Thread and Stone and The Infinite. She's also a contributor in the anthologies A Thousand Beginnings and Endings (Greenwillow/Harper) and Color Outside the Lines (Soho Teen). She considers herself a unicorn aficionado, enjoys marathoning TV shows, and loves to write about magic, manipulation, and family. She lives in Wisconsin with her husband, kids, and an excitable shih tzu.

Praise for Forest of Souls, Book One in the Shamanborn Trilogy

“Lee’s writing and characterizations all but guarantee this one will have a rabid fanbase craving more.” – Buzzfeed

“Lee is a masterful world-builder, creating intriguing scenarios and a compelling cast of characters, anchored by the strong portrayals of female friendship. For fans of Natasha Ngan and Joan He, and for any high ­fantasy ­collection.” – School Library Journal

“Sirscha’s path to discovery and acceptance is thoughtful and heartfelt... A refreshing fantasy for readers looking for more friendship and adventure, less romance.” – Kirkus Reviews

“With a backdrop of political intrigue, deep magic, and hidden roots, Forest of Souls is a tantalizing beginning to a rich new fantasy series.” —Traci Chee, New York Times best-selling author of The Reader trilogy

“With magic as luminous as it is terrifying, Lori M. Lee weaves a vibrant tapestry of sisterhood, self-discovery, and the long legacies of battles between good and evil. Absolutely enchanting.” – Natalie C. Parker, author of Seafire

“Set in a vibrant new world that's as enchanting and ethereal as it is dangerous, Forest of Souls drew me in from the very first page and held me captive in its spell of magic, intrigue, and the bonds of friendship. Perfect for fans of Sabaa Tahir and Roshani Chokshi and will leave you shouting sisters unite!” – Mindee Arnett critically acclaimed author of Onyx & Ivory and Avalon

“A classic fantasy rooted in self-discovery, death-defying friendship, and political intrigue, Forest of Souls spins a tale as lush as its world. You can't help but want to see this dark journey through.” – Linsey Miller, author of the Mask of Shadows duology and Belle Révolte