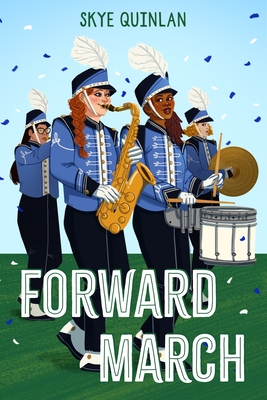 What’s worse? Someone using your face for catfishing or realizing you actually do have a crush on the catfished girl?

Harper “Band Geek” McKinley just wants to make it through her senior year of marching band—and her Republican father’s presidential campaign. That was a tall order to start, but everything was going well enough until someone made a fake gay dating profile posing as Harper. The real Harper can’t afford for anyone to find out about the Tinder profile for three very important reasons:

1. Her mom is the school dean and dating profiles for students are strictly forbidden.
2. Harper doesn't even know if she likes anyone like that—let alone if she likes other girls.
3. If this secret gets out, her father could lose the election, one she's not sure she even wants him to win.

But upon meeting Margot Blanchard, the drumline leader who swiped right, Harper thinks it might be worth the trouble to let Margot get to know the real her.

With her dad’s campaign on the line, Harper’s relationship with her family at stake, and no idea who made that fake dating profile, Harper has to decide what’s more important to her: living her truth or becoming the First Daughter of America.

Skye Quinlan (she/her) was born in California during an earthquake and raised in the Midwest, where cornstalks outnumber people. Forward March is her debut novel. When she’s not writing, you can find her at the nearest metaphysics or craft store, dressed up in cosplay at the nearest convention, or ruining the furniture in her basement with epoxy resin and paint. She still lives in the Midwest, with her wife, their dogs, and the occasional little human who comes to visit them often (their niece).

"Quinlan skillfully weaves everything together brilliantly into one very natural-feeling, heartwarming, and compelling story [...] A wonderful ace rom-com bursting at the seams with representation [...]"
—School Library Journal

“I ate up Skye Quinlan’s prose like candy. Forward March is a fun, inclusive, gloriously band geeky romance that tugged hard at my heartstrings.”
—Robbie Couch, author of The Sky Blues

“Fresh, full of heart, and gloriously queer. Skye Quinlan hits all the right notes.”
—Tobias Madden, author of Anything But Fine