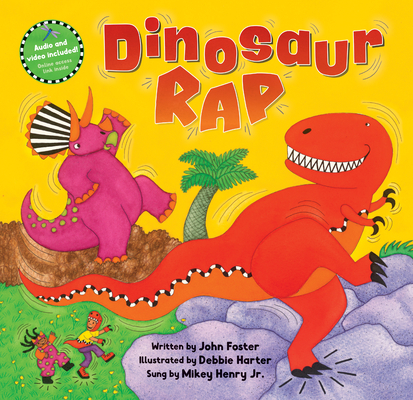 
Available to Ship - Usually ships in 5 - 10 days.
Get movin' and groovin' with 7 dancing dinosaurs With funky lyrics and a catchy rap performance, this rhythmic romp encourages safe and exciting creative movements that are sure to inspire pretend play. Colorful artwork by bestselling Animal Boogie illustrator Debbie Harter and 6 pages of dinosaur facts make this an inclusive, educational and fun addition to your singalong library. You're guaranteed to put it on repeat A QR code on the book provides access to video animation and audio.
John Foster is a children's poet and poetry performer who has edited over a hundred anthologies and published twelve books of his own poetry. He lives in Oxfordshire, UK, and taught English for twenty years before becoming a full-time writer. He is well known in schools and libraries for his performances of dancing dinosaurs -- and a rapping granny!Debbie Harter has illustrated over 20 books for Barefoot, including the beloved Bear series. As a child, Debbie would "lose herself in books (as long as they had pictures)" and hopes to continue doing so until she's very old. She lives in Cornwall, England.Mike Henry Jr. is a Jamaican-American musician, artist and educator. A graduate of Lesley University and Simmons Graduate School of Social Work, Mikey works for Boston Public Schools as a licensed social worker for children and teens. Mike lives with his wife and his daughters, Aubrey and Ainsley, in Massachusetts, USA.