A Collection of Poems by Robert Frost (Leather-bound Classics) (Hardcover) 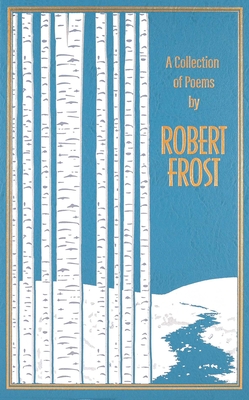 A Collection of Poems by Robert Frost (Leather-bound Classics) (Hardcover)


Available to Ship from Warehouse - usually ships in 6 - 10 days.
The early works of beloved poet Robert Frost, collected in one volume.

The poetry of Robert Frost is praised for its realistic depiction of rural life in New England during the early twentieth century, as well as for its examination of social and philosophical issues. Through the use of American idiom and free verse, Frost produced many enduring poems that remain popular with modern readers. A Collection of Poems by Robert Frost contains all the poems from his first four published collections: A Boy’s Will (1913), North of Boston (1914), Mountain Interval (1916), and New Hampshire (1923), including classics such as “The Road Not Taken,” “Fire and Ice,” and “Stopping by Woods on a Snowy Evening.” This handsome leather-bound volume is an elegant addition to every poetry lover’s shelf.

Robert Frost (1874–1963) was a critically acclaimed, highly popular American poet. He was awarded four Pulizer Prizes for poetry and served as the poet laureate of Vermont. His most famous works include "Stopping by Woods on a Snowy Evening," "Mending Wall," and "The Road Not Taken."

Ken Mondschein is a college professor, scholar, fencing master, jouster, and author with expertise in subjects ranging from medieval history to contemporary politics. He was a Fulbright scholar to France, received his PhD in history from Fordham University and is certified as a master of historical fencing by the US Fencing Coaches' Association. His work includes history, fencing, introductions to works of classic literature, and other projects.