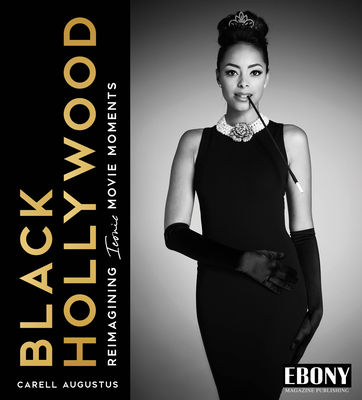 A visionary photography book that brings together the best of classic Hollywood with today's iconic Black entertainers for an immersive experience unlike anything you've ever seen before.

Black Hollywood is a groundbreaking reimagining of Hollywood's most beloved films, including Breakfast at Tiffany's, Singin' in the Rain, Mission: Impossible, Forrest Gump, and more. Visionary photographer Carell Augustus has created a "who's who" of today's Black entertainers recreating iconic cinematic scenes, renewing readers' appreciation of the past while asking questions about representation in media and inspiring the artists of the future.

Compiled over the course of more than ten years and highlighting more than sixty-five stars such as Vanessa L. Williams, Dulé Hill, Karamo Brown, Shemar Moore, and others, Carell Augustus says, "Black Hollywood is not just a book for Black people—it's a book for all people about Black people. About the dreams we were never told we could achieve. About the places we were never told we could go. And now, finally, about how we can get there."

Carell Augustus is a Los Angeles-based photographer whose career has taken him around the world to shoot some of the biggest stars on the planet. His celebrity clients have included Viola Davis, Beverly Johnson, Mariah Carey, Elizabeth Banks, Pierce Bronson, Meghan Markle, Serena Williams, Snoop Dogg, and more.

"Photographer Augustus succeeds brilliantly with these arresting reimaginings of classic Hollywood scenes using Black performers… Augustus and his team exemplify the power, beauty, and talent that Hollywood and film lovers have missed." — Booklist