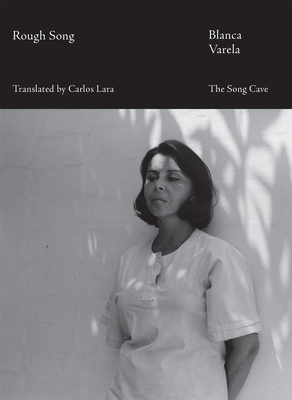 Poetry. Latinx Studies. Women's Studies. Translated by Carlos Lara. It's hard to believe that the books of Blanca Varela (1926-2009), considered one of Peru's greatest poets, as well as the first woman to win the Federico Garc -a Lorca International Poetry Prize, have not been translated into English until now. Originally published in Spanish in 1978, this new publication of ROUGH SONG, heralds the long overdue introduction of a major Latin American poet to English-language readers. Born into a family known for advancing art in Latin America, Varela lived briefly in Paris in the late '40s and '50s where she quickly became friends with Andre Breton, Jean-Paul Sartre, Henri Michaux, Simone de Beauvoir, Alberto Giacometti, and in particular, Octavio Paz, who called Varela the most secret, timid and natural of them all.

Returning to Lima in the '60s, she established herself as one of Peru's key literary intelligentsia. The poems in ROUGH SONG, these flowers for the ear, range wildly in form, from two lines to seven pages long, and each presents a world of intense precision in language, fully conscious of reality and its metaphysical limits--yes / the dark matter / animated by your hand / it's me. Varela's deceptively simple poems hold a mysteriously delicate weight far beyond their length. A formidable voice in Latin American literature, Blanca Varela is destined to inspire awe and summon new readers for years to come.

These haunting songs unfold with the mysterious precision of fractals, bending their interiors into pliant, living forms. As I get to know Blanca Varela's work, in Carlos Lara's beautiful translation from the Spanish, my ear becomes attuned to the smallest moving gradations, the spider that 'doesn't dare descend one / more millimeter toward the ground, ' a surrealism I associate with Alejandra Pizarnik, Henri Michaux, and I'm so grateful to have come to it.--Alexis Almeida

What a surprise to find in the work of this mid-century Peruvian poet a mind and style that so resonate with my own. Varela's poems are almost violent in their suddenness, their brevity. Unsentimental and often bleak, they are always surprising. Discovering her enlarges my picture of the world.--Rae Armantrout

In ROUGH SONG, Blanca Varela uses language to create 'on the empty plate' and cuts reality open. Originally written in the '70s, this work remains both unpredictable and surprising. In these pages she condenses and transmutes the world into text and texture so that what emerges is legible and sharp. Here 'the word / slithering / will be your footprint.' Let us follow.--Gabriela Jauregui