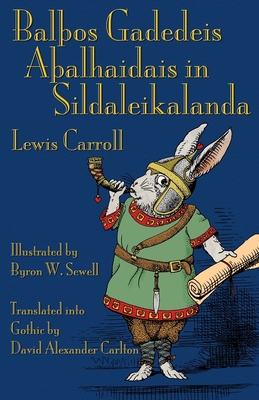 
Available to Ship from Warehouse - Ships in 3 - 6 days.
(This item cannot be returned.)
Gothic ("Gutiska razda" or "Gutrazda") was a continental Germanic language spoken by the Visigoths and Ostrogoths in many areas (most notably Spain and Italy) throughout antiquity and the early Middle Ages; while Gothic appears to have become functionally extinct sometime in the eighth century, some form of the language may have continued to be spoken in the Crimea until the sixteenth or seventeenth century. The Gothic Bible, translated from a lost Greek exemplar sometime ca. 360 CE by the Gothic bishop Wulfila, represents the earliest substantive text in any Germanic language. Gothic itself remains the only significant representation of the East Germanic branch of languages, which have since died off completely. Other extant works in Gothic include an exegesis of the Gospel of John known as "Skeireins", a partial calendar, and some minor fragments. Unfortunately, all extant texts are incomplete, so it remains unknown to what extent the extant fragments are written in idiomatic Gothic, as well as exactly what dialect of Gothic they might represent. This translation of "Alice's Adventures in Wonderland" seeks to transport Carroll's seminal work into the fourth-century Germanic world by Gothicizing both the language and environment of the original text. Why translate "Alice's Adventures in Wonderland" into such an ancient and idiosyncratic language? In part, because Alice-itself a textbook of idiosyncrasies-lends itself well to linguistic flights of fancy, and in part because the dearth of available Gothic reading material has occasioned the production of new literature in this important East Germanic language. "A alhaids" is to date the longest text written in Gothic in more than a thousand years.