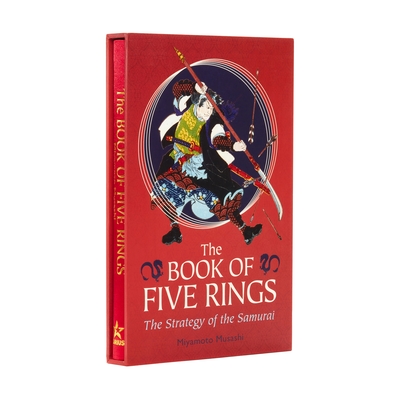 'When you attain the Way of strategy, there will not be one thing you cannot see.'
-Miyamoto Musashi

This deluxe silkbound slipcase edition presents The Book of Five Rings, a classic Japanese text written by undefeated swordsman Miyamoto Musashi. In it, he records his true principles which guarantee victory in martial arts and on the battlefield. Instead of relying on religion or theory, Musashi based his writings on his own experience, observation, and reason. The scrolls, published as The Book of Five Rings, have recently gained an international reputation in the business world as a means of resolving differences and achieving success. But their delineation of the psychological strength, rigorous self-control, and practical application necessary for dealing with physical and mental conflict also has a wider relevance and can be usefully applied to all our lives. Featuring beautiful full-color illustrations that complement the text, this luxurious hardback makes a perfect gift. ABOUT THE SERIES: The Arcturus Silkbound Classics series brings together deluxe gift editions of literary classics, presented with luxurious silk binding, striking embossed cover designs and full-color illustrations.
Miyamoto Musashi was born around 1584 into a samurai family in Harima province. His mother died soon after his birth, so he was raised by his step-mother and then his uncle, a monk from the Shoreian temple. While staying with his uncle, he was taught Zen Buddhisma and basic reading and writing. He had his first duel at the age of thirteen and went on to have 59 more, claiming never to have lost a single one. He completed his influential book on swordsmanship in May 1645, the year he died. Victor Harris (1942-2017) was an experienced kendoka, an expert on the Japanese sword (President of the Token Society of Great Britain), and head of the Japanese Department of the British Museum. He translated The Book of Five Rings into English for the first time.