B-29 Superfortress Units of the Korean War (Combat Aircraft) (Paperback) 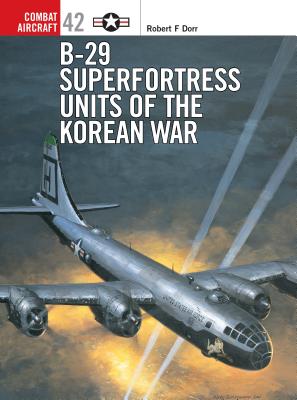 B-29 Superfortress Units of the Korean War (Combat Aircraft) (Paperback)

This is book number 42 in the Combat Aircraft series.

This book is the story of a majestic bomber of the propeller era flying perilous combat missions against a sleek, nimble warplane of the jet age, the Soviet MiG-15. A very heavy bomber and a sky giant during World War II, at that time the B-29 was the most advanced combat aircraft in the world. By the time North Korea attacked its southern neighbour in 1950, thus starting the Korean War (1950-1953) the B-29 had been reclassified a medium bomber. Many of its crew members had fought their war and settled down to raise families and begin careers only to be recalled to fight another war on a distant Asian peninsula.
Robert F Dorr is a well respected author of long-standing reputation - he has written over a dozen books for Osprey over the years. His histories on modern American combat aircraft like the F-101 Voodoo and A-6 Intruder have set the standard for works of this type. His ability to combine 'crew speak' with concise editorial comment gives his books a unique and revealing style of their own.