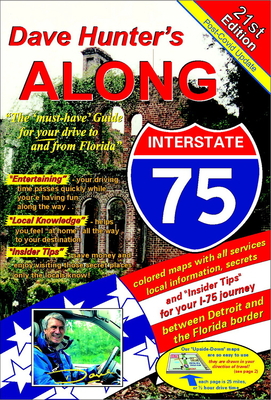 
Available to Ship from Warehouse - usually ships in 6 - 10 days.
Along Interstate-75, from Detroit to the Florida Border. Interstate-75 is the main route for the millions of Midwestern "snowbirds" who drive to and from Florida each winter . . . and the current edition of Along I-75 is the "must have" guide for the trip. Whether a first-timer or one who has driven the route for many years, the book is packed with local information along the way, a culmination of more than 50 years of the author's Florida-bound I-75 driving experience. Getting there is half the fun—local knowledge, "insider" and money saving tips, lodging & restaurant recommendations, and mile-by-mile roadside stories and entertainment. Each of the book's 25 mile-per-page colored strip-maps takes an average of 30 minutes to drive, providing a sense of pacing for your trip—excellent for planning your night stops while on the route. The two sets of custom-designed maps (south and northbound) are intuitive and very easy to use, even for non-map readers. Each "fits" your direction of travel so landmarks and features drawn on the right side of the map, pass on the right side of your car. Designed with in-car use in mind, the book has a laminated wrap-around cover and book mark flap. A concealed plastic spiral binding allows the book to be easily folded back to display the current road-section map. Completely updated every odd numbered year, Along I-75 contains no advertising or commercial content. Each current edition of the book has a "reader's only" website where major updates to the book's information are posted. Also includes updated and downloadable replacement maps and pages for the book.

The book features:
•78 colored 25 mile road strip maps (39 for each direction of travel)
•106 colored maps (side-trips and towns) and 196 colored photos
•67 b&w maps and photos
•105 charts and diagrams
•72 restaurant and money-saving tips
•24 Special Interest reports
Dave loves maps, history, driving and discovering unusual stories along the way. Combined with his fondness for writing, in 1992 this led to Along Interstate-75 — a travel & driving guide which is now in its 21st edition. It's a "must-have" addition for any Midwestern "snowbird" family heading out for the long-distance drive to Florida, each winter.

From an early age, Dave has been fascinated by history. His passion paid dividends while writing the I-75 guide. During research, he rediscovered two little known Civil War battle sites in North Georgia and found that the interstate ran right across the middle of the Union and Confederate battle lines. He also found a forgotten trail blazed in 1775 by Daniel Boone, which crosses the path of the modern I-75 in Kentucky.

Other "finds" include a supernatural site in Tennessee where blood stains mysteriously appears every few years ... and a stone tomb in which a Floridian Spaniard was bricked up alive, in 1821.

He has also flown across I-75 piloting an original 1909 Wright Brother Flyer B, from the Wright Brothers airfield, beside the interstate south of Dayton, Ohio.

Dave is a credentialed member of the Society of American Travel Writers (SATW) and undergoes peer review every two years to re-qualify and maintain his professional status.

Through his author and other journalistic activities, Dave has become the media "go-to" person when they are producing annual drive-to-Florida content; he has appeared in hundreds of newspaper articles and radio/TV guest appearances. His full biography may be found in the Canadian edition of Who's Who.

For more than fifty years, Dave and his wife Kathy, have traveled together — both “on the road” and through life. As researcher & editor, Kathy contributes a great deal to their books ... but much prefers to remain in the background. They are also the author/researcher team behind their other travel and Driving guide, “Along Florida's Expressways.”

When not seeking new stories and adventures, or updating existing material, you'll find Dave and Kathy living with their two Burmese cats Tammy and Thomas, at their home beside Lake Ontario, or at their Southern office, researching and writing in Lakeland in Florida.