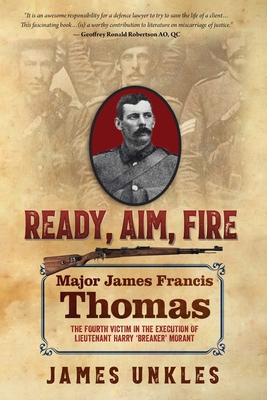 In 1902, three Australian volunteers who served with the British Army during the Anglo Boer War were tried and sentenced for executing Boer combatants. Lieutenants Harry 'Breaker' Morant and Peter Handcock were executed and George Witton sentenced to life imprisonment.
The manner in which these men were treated remains controversial, shrouded in protest that they were scapegoated for the war crimes of their British superiors.
The book is dedicated to the memory of Major James Francis Thomas who was relegated to history without an understanding of who he was and the part he played in the dynamic development of the town of Tenterfield in New South Wales, Australia, as a property owner, solicitor, newspaper proprietor, historian, poet, proponent for Australian nationalism, volunteer soldier. This book also tells how he came to serve in the Boer War, yet was destined to die alone from malnutrition, destitute having suffered from the stress of what he experienced in representing Morant, Handcock and Witton as their trial lawyer.
This book acknowledges the sacrifice Thomas made in acting for his clients, a task that took a terrible toll on his mental and physical health and his life in Tenterfield.