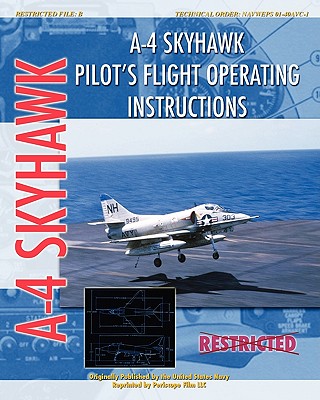 
Available to Ship from Warehouse - usually ships in 6 - 10 days.
(This item cannot be returned.) No refunds or exchanges
Designed by Douglas Aircraft Co.'s brilliant engineer Ed Heinemann, the turbojet powered, delta-wing A-4 Skyhawk played a key role in conflicts from Vietnam to the Falklands and Yom Kippur Wars. The Skyhawk was intended to replace the venerable Skyraider as a carrier-based, ground attack aircraft, yet Heinemann's design looked nothing like its predecessor. Its small, lightweight airframe was so compact that its wings did not even have to be folded for carrier stowage, and it surpassed the Navy's design specification for weight by nearly 100%. No wonder the nimble jet was dubbed "Heinemann's Hot Rod". The A-4 entered service in 1956, and first saw combat during the early days of the Vietnam War where it flew as a light attack aircraft. Its service in S.E. Asia was prolific, as it flew literally thousands of strike and escort missions and even scored an air-to-air victory over a North Vietnamese MiG. A Marine A-4 is believed to be the last American aircraft to drop bombs on Vietnam. During the conflict 362 Skyhawks were lost. The Navy retired the Skyhawk in 1975, although it continued flying as a trainer and adversary aircraft as late as 2003. Nearly 3,000 Skyhawks were built before production ceased in 1979, including a two- seat trainer model TA-4. The Skyhawk was widely exported and saw combat with the air forces of Kuwait, Israel and Argentina. This pilot's manual was originally classified "restricted" but has now been declassified and is here reprinted in book form.