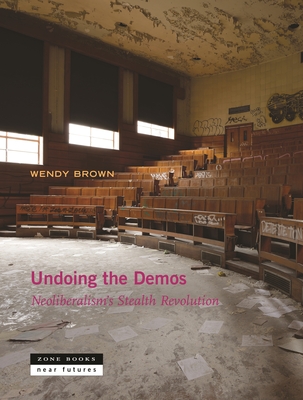 Neoliberal rationality--ubiquitous today in statecraft and the workplace, in jurisprudence, education, and culture--remakes everything and everyone in the image of homo oeconomicus. What happens when this rationality transposes the constituent elements of democracy into an economic register? In Undoing the Demos, Wendy Brown explains how democracy itself is imperiled. The demos disintegrates into bits of human capital; concerns with justice bow to the mandates of growth rates, credit ratings, and investment climates; liberty submits to the imperative of human capital appreciation; equality dissolves into market competition; and popular sovereignty grows incoherent. Liberal democratic practices may not survive these transformations. Radical democratic dreams may not either.

In an original and compelling argument, Brown explains how and why neoliberal reason undoes the political form and political imaginary it falsely promises to secure and reinvigorate. Through meticulous analyses of neoliberalized law, political practices, governance, and education, she charts the new common sense. Undoing the Demos makes clear that for democracy to have a future, it must become an object of struggle and rethinking.

A prize-winning examination of why nation-states wall themselves off despite widespread proclamations of global connectedness.