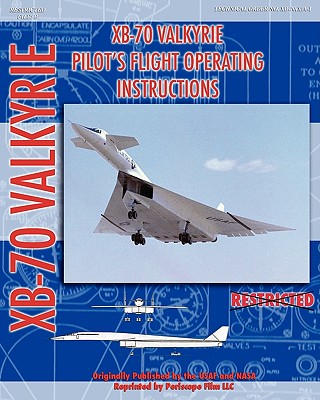 
Available to Ship from Warehouse - usually ships in 6 - 10 days.
(This item cannot be returned.) No refunds or exchanges
The XB-70 Valkyrie was an aircraft ahead of its time. Equipped with drooping wingtips, and designed with one of the highest lift-to-drag ratios in aviation history, the XB-70 challenged the known concepts of the flight envelope and demanded extraordinary developments in engineering and construction. The test program produced promising results, including a Mach 3 flight in May of 1966. Yet after a disastrous collision later that year resulted in the loss of one of two prototypes, the Valkyrie program was curtailed. The remaining craft was retired in 1969. Originally printed by NASA and the Air Force in the 1960's, this Flight Operating Handbook taught pilots everything they needed to know before entering the cockpit. Classified "Restricted", the manual was recently declassified and is here reprinted in book form. This affordable facsimile has been slightly reformatted. Care has been taken however to preserve the integrity of the text.