Surf Is Where You Find It: The Wisdom of Waves, Any Time, Anywhere, Any Way (Paperback) 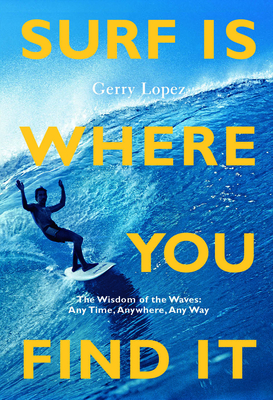 Surf Is Where You Find It: The Wisdom of Waves, Any Time, Anywhere, Any Way (Paperback)

The saying goes, The second best thing about surfing is talking about it afterward.

Gerry Lopez, one of the most revered surfers of all time brings readers into the intimately personal sport with Surf Is Where You Find It, a collection of stories that recount harrowing waves, epic wipeouts, and heroes encountered over a lifetime on the water.

From growing up in Hawaii in the '50s and '60s, to finding the tube in the early days at Pipeline, to pioneering legendary spots like Uluwatu and G-Land in Indonesia, Lopez has traveled for surf the world over. But for him, the people stood out the most. Originally published in 2008, Surf Is Where You Find It preserves memories of surf eras gone by, and commemorates those who helped shape the surfing world today.

Now, ten years and more than 50,000 copies later, Patagonia is once again re-launching the surfing classic in a fully redesigned edition with new photos. Timed to correspond with the release of a new documentary, The Yin and Yang of Gerry Lopez about Gerry produced by equally legendary surfer and skateboarder Stacy Peralta, these 38 stories and hundreds of photos offer more of Gerry than ever before. In these pages, Gerry pays homage to those who shaped surfing today -- surfing any time, anywhere, and in any way.

Gerry Lopez made his reputation at Pipeline, then went on to a lifelong career in surfing, snowboarding, and stand-up-paddle. He co-founded Lightning Bolt(R) Maui surfboards, was instrumental in developing the high-performance shortboard, and has appeared in many films. He lives in Bend, OR. Rob Machado is an Australian-born American professional surfer from Cardiff-by-the-Sea, a community in Encinitas, CA. Steve Pezman is the founder of The Surfer's Journal and has been the editor since 1992. He lives in San Clemente, CA.