The Islandport Guide to Lighthouses in Maine (Paperback) 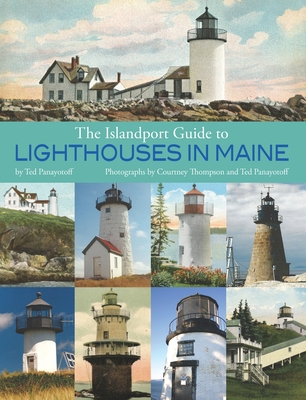 The Islandport Guide to Lighthouses in Maine (Paperback)

The allure of Maine lighthouses is as formidable as its seacoast, attracting thousands of visitors and enthusiasts each year. From the northernmost outpost of Whitlock Mills Light to Grindle Point Light on Isleboro, to the southern beacon of Cape Neddick (Nubble) Light--one of the most scenic and most photographed lighthouses in the world, boasting over 250,000 visitors annually--a total of sixty-four existing lighthouses dot the bold coast and rugged islands of Maine. The Islandport Guide to Lighthouses in Maine celebrates the long-standing history and importance of each lighthouse, as well as its modern-day use and accessibility. A special section for mariners will detail the sea approach to 22 of the lighthouses. Gorgeous four-color photography by photographer, Courtney Thompson, combined with vintage postcard imagery make this guidebook as handsome as it is useful, with updated descriptions and directions to each destination, GPS coordinates, a checklist, and relevant resource information on surrounding attractions that will help make the most of your visit.

Lighthouse historian and outstanding American Lighthouse Foundation volunteer and guide, Ted Panayotoff, has been instrumental in bringing Maine's Rockland Breakwater Light back to its former glory, and is currently overseeing the rehabilitation of the Oswego lighthouse in New York. A long-time former resident and inn owner in Camden, Panayotoff currently offers lighthouse tours onboard the schooner Mary Day in the summer. He has received numerous honors from the American Lighthouse Foundation, including the Len Hadley Volunteerism Award. He lives in Oswego, New York, with his wife.