Intersectionallies: We Make Room for All (Hardcover) 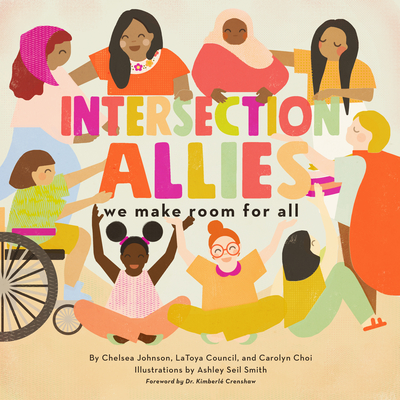 Intersectionallies: We Make Room for All (Hardcover)

ONE OF HUFFPOST'S RECOMMENDED "ANTI-RACIST BOOKS FOR KIDS AND TEENS"

A] celebration of solidarity, allyship, and community...A welcoming resource for conversations about equality and social justice that shows readers how identities are made up of myriad influences.--PUBLISHERS WEEKLY

The brainchild of three women-of-color sociologists, IntersectionAllies is a smooth, gleeful entry into intersectional feminism. The nine interconnected characters proudly describe themselves and their backgrounds, involving topics that range from a physical disability to language brokering, offering an opportunity to take pride in a personal story and connect to collective struggle for justice.

The group bond grounds the message of allyship and equality. When things get hard, the kids support each other for who they are: Parker defends Kate, a genderfluid character who eschews skirts for a superhero cape; Heejung welcomes Yuri, a refugee escaping war, into their community; and Alejandra's family cares for Parker after school while her mother works. Advocating respect and inclusion, IntersectionAllies is a necessary tool for learning to embrace, rather than shy away from, difference.

Featuring gorgeous illustrations on every page by Ashley Seil Smith, as well as powerful introductions by activist and law professor Dr. Kimberl Crenshaw, who coined the term "intersectionality," and Dr. Ange-Marie Hancock Alfaro, author of Intersectionality: An Intellectual History.

CHELSEA JOHNSON became interested in feminism through writers like Audre Lorde and Patricia Hill Collins as an undergraduate at Spelman College, a historically Black college for women in Atlanta, GA. She went on to study the politics of race, class, gender, and fashion at the University of Southern California, where she earned her PhD in sociology and gender studies in 2019. Chelsea now works as an applied researcher in the corporate world, using intersectionality to help companies design products with underrepresented groups in mind. LATOYA COUNCIL was born and raised in Dudley, North Carolina. She was first introduced to the concept of intersectionality at Spelman College, which inspired her scholarship, activism, and vision for a more inclusive world. LaToya went on to earn her MA in sociology at the University of Colorado, Colorado Springs and is currently finishing up her PhD in sociology at the University of Southern California. Her research theorizes how race, class, and gender shape work and family life. CAROLYN CHOI was born to immigrant parents in Los Angeles. After graduating with her BA from UCLA, Carolyn began community organizing with an immigrant rights organization in Los Angeles, where intersectionality was central to her advocacy work. She later went abroad to earn an MS in sociology at the London School of Economics and Political Science and is currently at the University of Southern California, finishing up her PhD. Carolyn's research touches on the topics of human trafficking and international migration. ASHLEY SEIL SMITH, illustrator, was raised in California and the conservative South, the last of five daughters. After studying women's health in India during undergrad, Ashley committed to public conversations about feminism and bodies, and created a menstruation museum and period box subscription company. She received her MFA from the School of Visual Arts in New York City and now works full-time as an artist. Her work has been featured in the New York Times, Lenny, and Forbes. She lives and works in New York City.