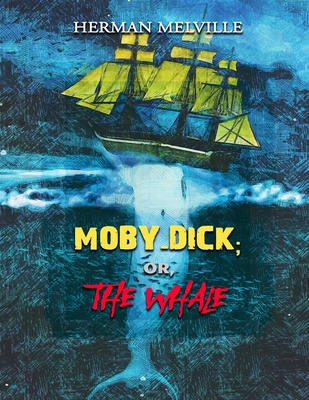 By Herman Melville
$26.45
Out of Stock in store and warehouse. Subject to publisher availability
(This item cannot be returned.)

Moby-Dick; or, The Whale by Herman Melville

Our intrepid speaker, ex-school teacher, famous "Name" Ishmael, is that really his name - enlisted as a sailor on a whaling journey to cure depression/miserliness. On a voyage to a boat in Nantucket, he meets with the heavily tattooed Southern Islander Quakek, returning from a recent whaling trip. Ishmael and K-Veek became the best roommates almost immediately. Together they sign up for the expedition on Pequod, which is about to embark on a three-year journey to hunt sperm whales.

On the Pequod, Ishmael meets friends - a loyal Starbucks, a cheerful Stubbs and a ferocious flask - and other harpooners, Tashteko and Daegu. Captain Ahab, the commander, remained solitary in the cabin and was never shown to the crew. Well, ominous, oh well, a colleague organizes the embarkation of the journey as if without a captain.

As Ishmael's curiosity about Ahab reaches a state of fever, Ahab begins to show up on deck and we find him missing a leg when Starbuck asks if it's Moby Dick, the famous white whale. With his leg removed, Ahab admitted it was and forced the entire crew to swear to help him hunt Moby Dick to the end of the world and take revenge. His injuries They all swear

After this bizarre incident, things turned into a fine routine aboard the Pequod. While they were constantly on the lookout for Moby Dick, the crew had a lot of work to do: hunting sperm whales, killing animals, and harvesting sperm oil. That they were kept in a large tank that was kept

Ishmael took advantage of this lull in the development of the plot to provide readers with a wealth of contemporary background information on whale biology, the whaling industry, and the maritime expedition. Pequod faced another ship, which informed The latest news about the White Whale, oh yeah, and everyone found Ahab secretly sending an extra crew on board. (Led by the mysterious demon snatcher Fedallah) to help Ahab fight Moby Dick when he meets him.

For more than a year, ships traveled across the Atlantic, around the southern tip of Africa, through the Indian Ocean, the Southeast Asian islands, to the Sea of Japan, and eventually to the equator in the Pacific Ocean: the home turf of Moby Dick

Despite the first Starbuck's hatred and many bad omens. (All maritime tools are broken, Typhoon tries to push the ship backward, and Pequod confronts another ship that has lost its crew in Moby Dick's wrath.) Ahab insists on following further. The Quest for Single-Heart Revenge In mocking Christians' baptism, he goes so far as to dip a specially forged harpoon into human blood, and then he has the perfect weapon for killing Moby Dick.

When we finally thought the novel would end without seeing this famous White Whale, Ahab saw him and the chase continued. For three days, Ahab pursued Moby Dick by sending a whaling ship to chase after him - only to see how each whale was wrecked by an indomitable whale. At the end of the third day, the White Whale attacked the ship itself and Pequod went down with all the hands.

Even while his boat was sinking, Ahab in his whaling boat threw his harpoon one last time at Moby Dick. He made the mistake of strangling himself, drowned/strangled to death.

The only survivor of the annihilation is Ishmael, who lives to tell the story because he is attached to a coffin built for his friend Quigek when the harpoon appears to have died too fever

END_OF_DOCUMENT_TOKEN_TO_BE_REPLACED

This feature require that you enable JavaScript in your browser.
END_OF_DOCUMENT_TOKEN_TO_BE_REPLACED

This feature require that you enable JavaScript in your browser.
END_OF_DOCUMENT_TOKEN_TO_BE_REPLACED

This feature require that you enable JavaScript in your browser.
END_OF_DOCUMENT_TOKEN_TO_BE_REPLACED